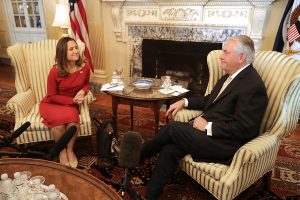 By Brenda O’Farrell
Special to the Advocate

Last month, the president of the Canadian Federation of Agriculture travelled to Washington, D.C., to take part in a joint press conference with his counterparts from the United States and Mexico on the day talks were formally launched to renegotiate the North American Free Trade Agreement. The heads of the national farming groups had a clear message for negotiators: “Do no harm.” In the agricultural sector, they said, NAFTA was a success story for all three countries. Was the trip worthwhile?

In an interview with Ron Bonnett, the president of the Canadian Federation of Agriculture, earlier this month, the answer was a resounding yes – for two reasons:

First, the trip there provided the opportunity to send a strong message to the U.S. Congress, who was ultimately the target, Bonnett said. The national farming groups wanted to underline to the elected members how many jobs were at stake in the agricultural economy.

Second, the return trip was perhaps even more successful, because Bonnett’s seat on the plane from Washington to Toronto was right next to the one occupied by Chrystia Freeland, federal minister of Foreign Affairs, who was returning to Canada after presiding over the kick-off to the trade talks. The seating arrangement offered Bonnett a unique opportunity.

“It was kind of nice, just having a conversation,” Bonnett said, explaining the exchange was very informal in nature, and lasted the length of the flight, about an hour and a half. “She was completely aware of what we were doing,” he said. “I feel very confident she has an understanding of the issues. She understands the sensitivity of supply management.”

Bonnett stepped off the plane at Pearson International Airport more confident about the negotiations than he was when he left for Washington. He said Freeland, who grew up on a farm in Alberta, has a very knowledgeable grasp of the issues Canadian farmers face. Both her father and paternal grandfather were farmers.

As the third round of negotiations is set to begin, Bonnett is confident. Issues related to agriculture have not been dealt with in a substantive manner yet, he said. And he recognizes that pressure by the White House “to more than tweak” the accord is worrisome.

“This is the strangest negotiation we have ever seen. Everyone is keeping their heads low,” he said. “Mexico and Canada are united in the desire to improve the agreement.”

But he acknowledges that because of the pressure from U.S. President Donald Trump, there is a lot of posturing. “Don’t believe everything you read in the media right now,” he said.

On Aug. 16 in Washington, the CFA, the American Farm Bureau Federation and Mexico’s Consejo Nacional Agropecuario issued a joint statement outlining five areas where the NAFTA accord could be improved:


Quick Facts:
Agriculture and agri-food systems in Canada generated $106.9 billion in 2013, accounting for 6.7% of the country’s GDP.
Agriculture provides one in eight jobs in Canada, employing over 2.2 million people.
The performance of the agriculture and agri-food system depends on their ability to compete in both domestic and international markets.
Canada was the world’s fifth-largest exporter of agriculture and agri-food products in 2013, with 3.5% of the total value of world agriculture exports.
The U.S. is Canada’s most important export destination, accounting for 50.8% of total Canadian exports. China accounts for 11.2%, while Japan, E.U., and Mexico account for 17% combined.
In the U.S., under NAFTA, U.S. farmers and ranchers have benefited from an increase in annual exports to Mexico and Canada, which have gone from $8.9 billion in 1993 to $38 billion in 2016.
20 percent of U.S. farm income is based on exports.
Source: Canadian Federation of Agriculture and American Farm Bureau Federation